Here's a chart for my version of Goblish.  This is what I use to make names for goblin NPCs, goblin villages, or any goblin words.

Feel free to make your own, better version.  Hack Goblish is for hacks, like me.  In either case, once a few words are rolled up randomly you might find certain rules for grammar start to take shape.  Whenever one occurs to you, just write it on the sheet.  It could be anything.  A particular combination of sounds might act as a root word, so it shows up in many related words.  Maybe most plurals end with the same sound.  Maybe some languages use howls, hisses, or clicks so you put those in the chart as predominate and frequent results.  It's the language for your goblins in your game, just write down whatever grammar and sentence structure rules you like and roll up the rest randomly.  Or let the players do it.  They love that shit.  Rolling up something that then becomes canon, like the name of a village?  Hell yeah.  That's almost as good as getting to name it yourself. 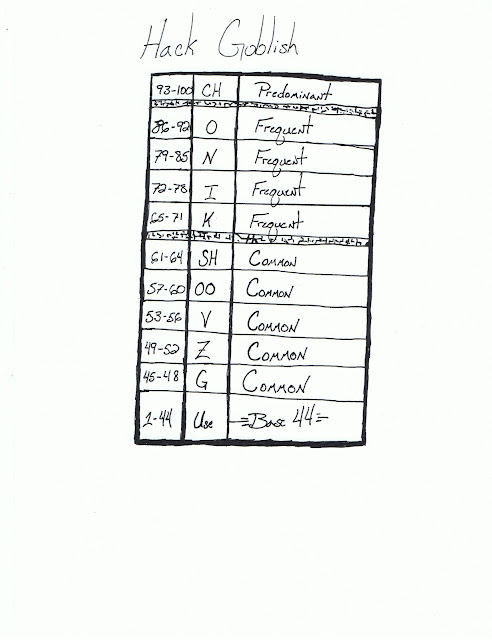 You roll percentage dice to determine each phoneme (distinct sound) used to say the word aloud.  A few rolls for short words, more for longer words.  The results here will form a pronunciation key, you can spell the word however you like.  By keeping certain sounds common to certain languages, I'm hoping that the randomly created words for each language will sound as if they belong together.  It seems a lot easier than inventing whole languages like Tolkien did.  As always, you may need to mix up the order a bit or add some vowel sounds to pronounce the result.


First, let's roll up a name for a goblin shaman.  I don't want it to be very short or very long, so I'll use 6 phonemes.


Second example.  Some PCs decipher some goblin runes about "blood".  Now they want to know how that is pronounced in the Goblish language, because, you know.... players.  So let's roll it up.  The word "blood" has 4 phonemes in English (B-L-U-D), but I'll say that it has 5 phonemes when spoken in Goblish.  Because, why not?