I thought it might be fun to make a dungeon built inside a tesseract, but mapping the thing is a bit of a challenge.  I eventually made this model that helps me to visualize travelling within the tesseract, so I thought I'd go ahead and share it.  I'm sure that I don't yet fully understand tesseracts but I'll go ahead and attempt to explain them anyhow.  Wish me luck.

A tesseract is the analog of a cube brought into four-dimensional Euclidean space; a tesseract is to a cube as a cube is to a square.

It might help to think of a tesseract as 8 different 3-D cubes that are attached in an extra-dimensional way.  Each cube shares a side with 6 of the other cubes (4 walls, floor, and ceiling).  However each cube also has an opposite cube on the other end of the tesseract that it can't touch directly, but both of these will touch all six of the others.

If someone were to be teleported into a tesseract the space within might seem to be perfectly ordinary at first.  There don't need to be any obvious distortions or bending of space, the person likely wouldn't notice anything amiss until they started travelling through multiple cubes.  Passing from one cube to another might be obvious, but it could also be something as innocuous as a doorway.  If the person inside picks any direction and walks in a straight line then they would end up passing through three new cubes, but the fourth cube they enter would be the original cube that they started from.  They are effectively trapped until they find some extra-dimensional means of escape.

My handy diagram is below.  The thick black lines show how the sides of the zones actually touch each other.  I've colored each of the cubes/zones to make reference easier.  It might help to think of the Green Zone as the starting point because the six directions (up, down, north, south, east, west) are all from the perspective of a stick figure person who is standing in that green cube facing the same direction as the viewer of the diagram (north).  Below the diagram is a list to help me navigate travel from one zone to another.  For example, "Green Up - White Down" means that taking stairs up through the ceiling of the green zone will bring you up through the floor of the white zone. 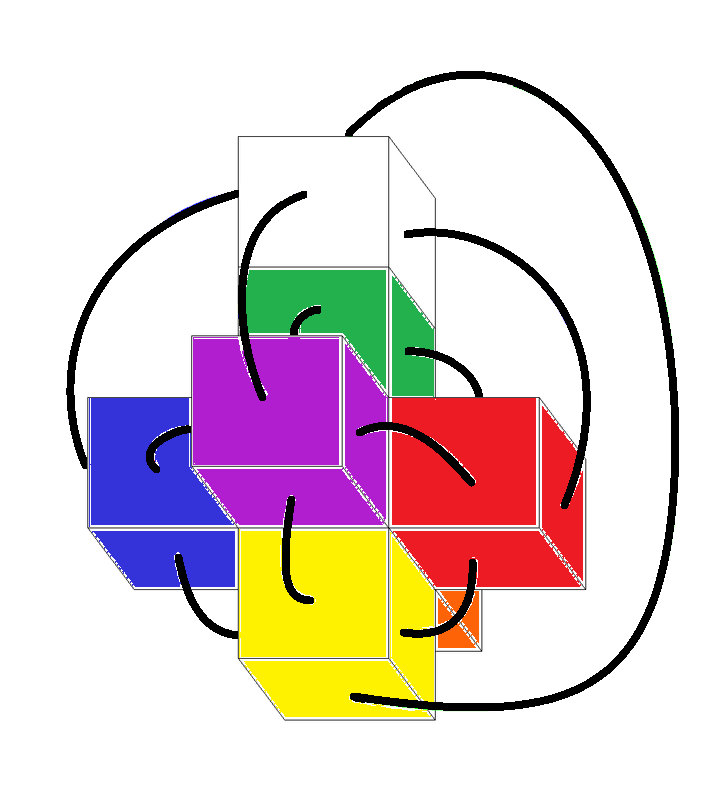 I think of the White Zone as being "above" the other zones, while the Black Zone as "below".  This way the six middle zones will all seem to have the same gravity.  The white and black zones are going to have some kind of gravitational weirdness though.  I'm thinking of making them both zero gravity zones and maybe filling the black zone with water, but I'm still not sure.

I hope this helps someone.  It could make for a neat little eight room dungeon (Hut of Baba Yaga?), but I think I'm going to try for something larger where each zone is a different dungeon level with it's own particular theme.