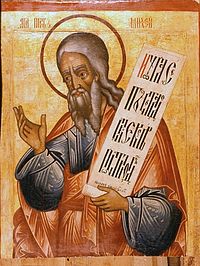 So, I've had this campaign setting bouncing around in my head for a while now.  In a nutshell, it's a fantasy version of Mesopotamia that incorporates some ancient alien theories and a bunch of my own strange ideas. 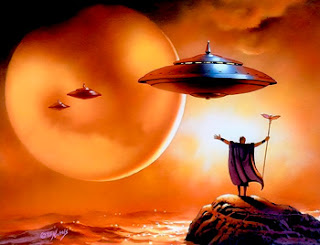 I'm thinking something like ancient Sumer circa 3000BC, but honestly I'm chucking historical accuracy out the window on this one.  I'll just dive right into it and you'll see what I mean.

The "gods" (known locally as the Anunnaki) are actually refugee aliens who escaped from an interplanetary war.  They can cloak their ships, but those are meant for quick trips, not permanent living quarters.  Those ships had to refuel and resupply somewhere, and Earth looked nice in a kind of galactic backwater sort of way.  Knowing that they were being hunted, they hollowed out an elaborate maze of underground tunnels and traps (dungeons), and did not brave the surface again for many thousands of years.  The Anunnaki did all kinds of genetic experimentation down there (thus monsters), because they wanted to perfect a new intelligent species that would seem indigenous (should their enemies still be looking) and could be used as workers.  They set their new slave race (humans) loose on the surface, and then put themselves into cryosleep up in the cloaked mothership (taking turns at watch) until enough time had passed that some installations could be built on the surface and seem to be the natural progress of human development.  There was no way to tell how closely their enemies were watching this world, and building something too complex too soon could arouse suspicion and get the whole planet blown up.  Apparently, the Anunnaki's defining trait is patience.


Are you with me so far?  No big deal, the PCs don't really need to know any of that stuff anyhow.  What is important is that the Anunnaki have been guiding humanity for the last few centuries in order to kickstart civilization. 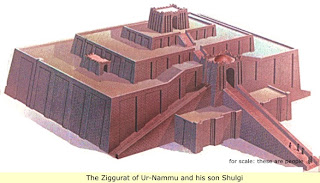 There are a number of cities now with populations of about 5000-50,000.  The center of each city is the ziggurat temple complex from which the Anunnaki rule.  Surrounding the ziggurat is a grand bazaar full of craftsmen and traders.  Some of the most obedient humans are given preferential treatment and special training by the Anunnaki.  Some of the most clever are even taught to use the magic of the gods.  The magic of the Anunnaki is actually superior technology in the form of very fast moving nanoclouds programed to transform matter and energy in response to trigger words and complex gestures.  Not willing to give the humans full control of such a powerful tool, the nanoclouds are all programmed to delete the instructions for their use from both tablets (scrolls) and human memory after every use (cast and forget).  Over time, these favored humans become the priests of the ziggurats who teach, organize, and bring the commands of the Anunnaki to the common people.  So, the magically trained priests (called Zagmi) are actually going to use the Magic-User class.

Little known fact:  About 25 years ago all the Anunnaki went into their "sacred houses" at the top of each ziggurat and flew up into the sky.  The head priest of each city (the Ensi) was commanded to hold things together until the Anunnaki return, but none of them knows how long that'll be.  Almost all of the Ensi are claiming to still be in contact with their gods, but the number of high level scrolls are dwindling and the Ensi are beginning to feel control slipping away.


The wild people from the hills of Elam have shaman/druid/witch types who practice a kind of natural magic that the Anunnaki do not understand at all.  The "old ways" of magic that these humans developed while the Anunnaki cryo-slept seem to defy all scientific testing.  As a result, these magics are forbidden inside the cities and practitioners are treated with suspicion by the priests of the Anunnaki.  Any of the hill peoples deemed troublesome are either driven far away from the cities or rounded up as slaves.

The third and latest group of spellcasters are what I call the Prophets.  These are all monotheists, but they do not necessarily agree on which god that is.  They all agree that the Anunnaki are false gods, and seek to convert others over to their faith.  It's not an easy life.  These Prophets are hunted down and made an example of by those faithful to the Anunnaki, and it is hard to stay hidden and convert followers at the same time.  The Prophets use the Cleric class, but instead of praying for spells each day, they perform miracles.  At first level they can use Turn Undead/Bless ability, which will actually ward off all kinds of bad juju (uses per day equal to your level).  At second level they gain access to every first level cleric spell, and can cast any of these at any time (one per round).  However, these are not repeatable spells, but miracles that can only be used once per lifetime.  Just keep a spell list with your character sheet and cross them off as you cast them.  Prudence and timing is the name of the game for these guys and gals, oh and you'll want witnesses to your miracles too, otherwise no one is going to join your faith.  Charisma is their prime requisite.  Your henchmen get a loyalty bonus if you can get them to convert, and instead of gaining a bunch of loyal followers late in your career, you gain 1 each level.  Followers do not count toward your max number of henchmen, and they can gain levels as a Prophet.  Turning Undead is easier if your followers are present, but they don't all get separate rolls, rather each follower gives you a +1 bonus to your Turning roll (max of +6 to the success roll and +6 to the effect roll, so that 13th follower isn't actually helping).  Also, each follower gets only one single-use miracle, and it has to be one that you have already performed.  If your Prophet PC ever dies, your highest level follower becomes the new head prophet for the faith and gets a fresh list of miracles to perform (minus whichever one they already used while in your service).

The other two class options are Fighters and LotFP style Specialists.  The Specialists will have a bunch of assassin/thief/hunter type skill options to choose from. 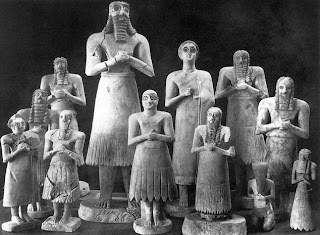 Email ThisBlogThis!Share to TwitterShare to FacebookShare to Pinterest
Labels: Ancients and Aliens

Look what I found today.  This is a Caddis fly larvae.  They spin silk into protective shells that incorporate pebbles, sand, twigs, or whatever is lying around their streams or ponds.  French artist Hubert Duprat decided to see what they would do with some gold and precious stones.  You can find more info, pictures and a video over here.

I love the aesthetic.  I'll have to give these guys some stats.