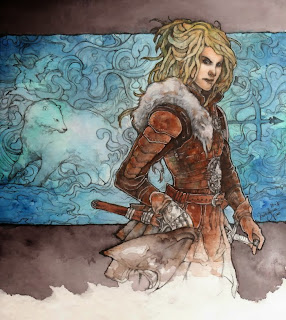 The Amazons are all fiercely independent female warriors and shamans, but only a few have been specially blessed by the goddess of the hunt.  These Amazon Huntresses are utterly at home in the forest, and are able to gain the trust and loyalty of wild animals.  While rare, a Huntress need not be born an Amazon; some women gain these abilities after living alone in the wild lands for years.  Nor is belief in the goddess a requirement, instead the goddess will bless worthy women who break free of male dominated society and embody the wild huntress aspect of the warrior goddess.

Most Amazons are impressive warriors, equal to male fighters in all respects.  Amazon daughters begin their martial training at a young age, taught by their mothers to protect themselves from male aggression.  A Huntress has honed her skills even further, she usually has quicker reflexes and better accuracy with bows and thrown weapons.  Amazon warriors can wear any armor, but the Huntress prefers not to sacrifice her freedom of movement and wears only leather armors or none at all.

The Amazons live on the outskirts of civilization, often riding together in nomadic groups.  They distrust most men, but can be amicable if approached carefully and treated with respect.  They will occasionally come to trade for supplies or simply to explore the civilized lands.  Rumors persist of a great Amazon city somewhere deep in the wilds.  It is said to be a place where men are kept as slaves and wild animals act as pets. 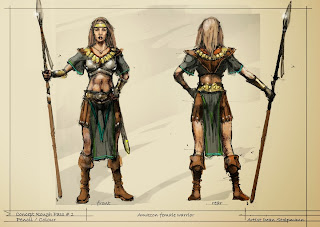 Amazon Huntress
Requirements:  Female, Every Ability Score 9+
Prime Requisite: DEX and CHA
Hit Dice: d8
Hit Progression: as Fighter
Saves: as Fighter
Max Level: None
Weapons: Any
Armor: Padded, Leather, Studded Leather and Shield
Special Abilities:
Move Silently
Same percentage as thief
Accuracy
All ranged attacks get +1 to hit.  This includes lassos and whips.
Instinctive Dodge
Grants the Huntress an AC bonus against a single attack each round.  She must see the attack coming, so this cannot be used against sneak or surprise attacks.  This AC bonus is equal to her level, or half if she is wearing armor.
Tracking
Base chance equal to Hear Noise for tracking a human through a dungeon setting.  You might need to roll again if your quarry passes through a room with multiple exits or a junction of passages.  Tracking through the wilderness is easier, but may also need to be rolled again from time to time.  Before you roll, give the DM time to take circumstances into account and decide if your chance of success should be modified.  The DM's decision is final, but here are a few of my suggested modifiers.
+2-in-6  if tracking through thick vegetation or wilderness
-1-in-6  if quarry is halfling sized
+1-in-6 if quarry is ogre sized
-1-in-6 if quarry uses a concealed or trap door
-2-in-6 if quarry climbs a ladder, rope, or cliff
-3-in-6 if quarry uses a secret door
-impossible- if the area is clean stone without grime or dust
Difficulties can lower a 1-in-6 chance down to 1-in-8 then 1-in-10 and eventually 1-in-12.  Benefits can raise a 5-in-6 chance up to 7-in-8 then 9-in-10, and eventually 11-in-12.  The DM can always choose to skip the roll and just declare the tracks to be either obvious or impossible to follow based on the circumstances.

Enthrall Beast
2 uses per day - This usually only works on non-magical mammals, but it might also work on magical steeds of the same alignment as the Amazon (unicorns, pegasi, nightmares).  The Huntress makes eye contact and uses calming noises and gestures while approaching the animal, eventually touching the beast gently at the end.  She must genuinely not wish to harm or trap the animal; they will sense any trickery.  So long as the attempt is made with good intentions and neither of them are disturbed the creature will remain transfixed until the end, then make a save vs. spells to resist.  Each successful use will turn one hostile creature to neutral, or one neutral creature to charmed.

A charmed beast will strive to protect it's mistress, but it is far from trained.  Beasts might greatly misinterpret social situations and become viciously overprotective.  Charmed beasts can be released from service and sent back into the wild at any time.  This may be advisable before entering a town or city.  Long time animal companions can learn a few commands, but they still might need to roll a morale check to see if they obey commands that conflict with their natural instincts.

The Huntress can safely have (1+CHA modifier) beasts charmed at the same time, with (Huntress level+CHA modifier) combined HD.  Exceeding either of those numbers will cause the beasts to become confused  and extremely jealous, growling and snapping at one another and even the Huntress.  During this time the beasts all make a new save vs. spells every turn.  Any who break free of the charm in this way will attack out of frustration and anger for at least one round before running off to return to the wilderness. 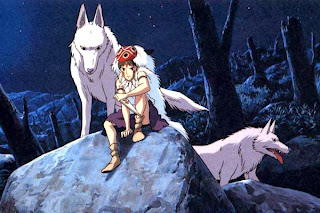 I intend to use this class with the Labyrinth Lord rules, but I've tried to keep it fairly system and setting neutral.  The following XP chart was made using my Customized Classes for B/X guidelines. 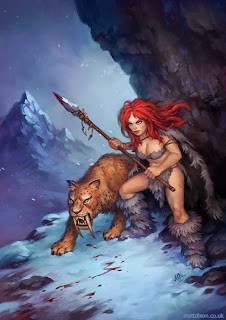