As expected, the final session of Boot Hill was a blast.  My character (Wild James Riley) played some cards,  got into a brawl in the saloon, threw a stunned opponent over a table and into another fella, and nearly blew up a mounted gang with dynamite. All in all, a pretty eventful session.  Then, right at the end as we were rounding up the wounded gang, Zeke Proctor jumped out of hiding and the two of us blasted holes into each other.  The doc tried his best, but the wounds were too great.  Wild James Riley takes his place in the bone orchard up on Boot Hill.

Honestly, I was surprised that Riley had avoided death for so long.  I had rolled him up for the first gunfight of the campaign, and he survived five or six shoot outs.  Gentleman Jim was the only character from the first session to survive the entire campaign.  So, faux-history remembers Gentleman Jim as one of the greatest lawmen of the old west.  I imagine that Riley is also remembered, but as more of a ruthless SOB.  Riley was on the wrong side of the law about as often as he wore a badge.  For example, Gentleman Jim shot and killed Jesse James shortly before Wild James Riley (and another PC, Josey?) killed Frank James.  The difference was that Riley was helping the James brothers rob the bank while Jim was trying to prevent the robbery.  After we escaped, with Jesse dead and Frank wounded, it just seemed easier to kill Frank and take his share of the loot.  Getting medical attention is problematic when you're on the run.

I had a lot of fun playing Boot Hill, more fun than I expected.  Apparently I find participating in westerns more fun than watching them.  Most of the credit goes to Jeff obviously, his free-wheeling "anything goes, especially if I think it sounds awesome" style can make any game enjoyable.  Mixing that with his research and presentation of historical gunfights resulted in some of my favorite scenarios.  He would lay out a hand drawn grid map of a saloon, small town, or whatever.  We'd get a short history lesson about that particular gunfight, date and location, the events leading up to the bloodshed, who was involved, who lived and died, and any repercussions from the battle.  Then it was like "It's up to you guys if you want to try to reenact the battle or change history.  Pick which side you want to be on, you can all be buddies or fight against each other".  We'd roll to determine our starting location on the grid, then the fight was on.  It was a nice bit of edutainment.

Sadly, the rules themselves were a little below my expectations, with one big exception.  The rules for drunkenness seemed cumbersome.  The gambling rules were kinda lackluster (highest percentage roll wins). The brawling and grappling charts are interesting, but I felt the canned results took some of the creative license away from the players and GM.  Still, it works better than most RPG unarmed combat.

The "one big exception" was the rules for shooting.  I had originally thought the 3 separate percentage rolls for each shot (to-hit, location, severity) were going to slow the game to a boring crawl.  Instead, it was enthralling to watch each shot unfold.  Interest was probably helped by the fact that each shot was potentially deadly.  It's cool enough that I want to play around with it some more.  So I'm going to use the Boot Hill hit location/severity charts (which I haven't actually seen) as an inspiration for similar charts to use in my Ezzin game whenever someone finds and uses instant attack devices like ray guns, muskets, or magic wands.

I'm thinking that these charts will only be used for projectiles/beams moving too fast to be seen.  Bows and crossbows will still use normal attack and damage rolls. 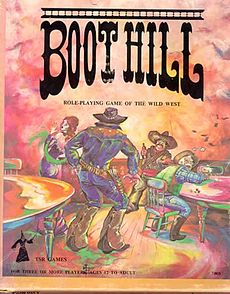 For those who don't know, Boot Hill is an older RPG with strong focus on the "Old West".  Gunfights, Gambling, Brawling, and all that jazz.  Wikipedia says "Boot Hill is a western role-playing game designed by Brian Blume and Gary Gygax. First published in 1975, Boot Hill was TSR's third role-playing game, not long after Dungeons and Dragons and Empire of the Petal Throne."

Honestly, I never cared much for westerns, but that didn't stop me from playing Boot Hill.  I like to try out new game systems and see how all the fiddly bits work together.  I've never even had a chance to peek at these rule books before, and you never know when you'll find some rule or table that you'll want to carry over into other games.  Also, when you have a chance to play at Jeff Rients' table, you take it.  I'm not too proud to admit that he's a better GM than I am.  His games are always a blast.

I've been a player for four sessions of Boot Hill.  I think that my character (Wild James Riley) has been involved in five or six gunfights now, and has managed to survive all of them.  PC death is a constant threat.  Experienced characters are somewhat faster and more accurate then inexperienced ones, but they are all equally fragile.  A character's max Strength (hit points) is determined at creation and doesn't ever increase, most characters seem to have between 10 and 20.  Every single gunshot has a decent chance to kill.  Most guns can shoot up to 3 times per round.  Most characters have between a 60% to 80% chance to hit, -10% for each shot after the first.  If you hit you make another percentage roll to determine the hit location.  Cover helps, always use cover.  A third percentage roll determines severity (each location has a different severity table).  Gunshot damage is either 3, 7, or Dead.  Oh, and if you win the fight but take wounds in the head or chest there is a chance that you'll die anyway from infection/organ failure some days later.  It's pretty hard core.  I'm rather enjoying it.

The rules and systems seem to have a lot of moving parts, but they all fit together rather neatly.  Play is a lot smoother than I had imagined.  At first I thought that all those percentage rolls would make combat drag out too much, but I find that I'm rather fond of it all.  Most gunfights are over in only a few rounds, so the extra rolls don't seem like a hassle.  Besides, knowing exactly where I hit the poor bastard makes my mental picture of the gunfight a lot more vivid.  The brawling chart is pretty cool.  I still need to try some gambling to see how that works.  I was hoping to see how mounted combat worked, but Jeff says we are ignoring those rules.  I trust his judgement, the overall FPM (Fun Per Minute) is probably higher without using them but I'm still curious how it works.

The one set of rules that I know I would tweak are the intoxication rules.  I like the end results, but getting there is a pain.  Basically, taking shots of whiskey will lower some basic attributes (speed and... accuracy?) while raising others (bravery and strength), this changes the associated rows of bonuses, then you have to tally the columns again see what your new weapon modifiers are.  That's a lot of scribbling and looking at charts for a temporary effect.

Grod knows, Jeff doesn't need my help... but this is how I'd house rule intoxication for Boot Hill.

GM determines level of intoxication, or a d10 is rolled.

(1) - Bent an Elbow, Had a Snort of Liquid Courage
+5% Accuracy thanks to calm nerves and a steady hand

(8,9) - Full as a Tick
-3 Weapon Speed, Normal Strength, Variable Accuracy (GM rolls percentage each round to determine your new base accuracy)

So, there you have it.  I did a little research to come up with 1800s slang for drunkenness.  Did you know that "Drunk as a skunk" didn't get popular until the 20th century?  I was surprised, I thought it was older.  Luckily the "boiled owl" version was in use, and is hilarious.

I'm mainly just sharing this in case anyone else wants to run Boot Hill with alternate rules for drunkenness.  I'm still debating whether I should show this to Jeff or not.  The next session of Boot Hill is our last.  We're moving on to a different game after that, so it's unlikely that we'll use the intoxication rules again anyhow.  Besides, there are more important things to focus on.  I still have three personal goals that I want my character to accomplish.

If you haven't heard yet, Lord Gwydion is busy creating the Zhongyang Dalu setting for the Flying Swordsmen RPG.  I think it's going to be awesome.  You can go check out the What a horrible night to have a curse blog to get more details.

Recently he posted a scan of the lovely Zhongyang Dalu map.  I love me some maps.  Especially some hand drawn maps.  Anyhow, his sketch pad is too big for his scanner so he had to splice together two images and as a result there is a minor seam visible.  He mentioned looking for a print shop later to get it scanned in one piece.

Now, my artistic skills are rather limited, but I am handy with a pixel editor.  So, I took it upon myself to try to hide the seam.  I also tried to help define some of the coastline and letters where the seam made them blurry.  If I couldn't blend the color differences well enough for my own taste, I just pushed one color over to the closest coastline or political boundary (see Yu and De). 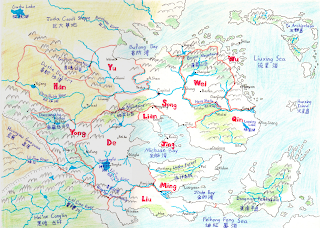 Happy Un-Birthday Lord Gwydion.  I hope you like it.  It's not perfect by any means, but hey, it's free.

I cleaned up a little fuzziness on some Chinese characters.  You should probably double check the first character of Bufang Bag, and the last character of Mei Hwa Mountians to make sure I didn't accidentally change their meaning.  Let me know if you want me to rework anything.  I could probably get the color transitions smoother in Yu and De if you prefer.  Let me know if you would like any other changes made.  I could thicken/brighten the red political lines, or remove the green where the red lines meet the rivers, change the name of a city, make something stand out a little more or a little less, or whatever.

I like doing this stuff, so don't be shy about requesting anything.  You can hit me up at saint_nik AT yahoo DOT com, or just leave a comment here.

Previously, I also edited another of your images.  I loved seeing this at the bottom of your blog.  I only tweaked the dragon's claws and the warriors foot a tad.  It was quick and easy.  I just thought I'd share. 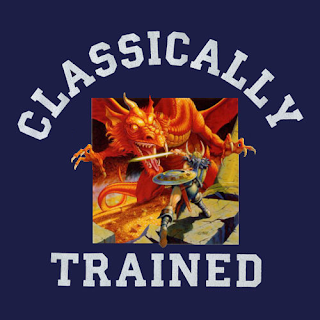