The Beast Tongues of Ezzin

I'm still working on the playable races/classes, but I think I'm nearly done.  One of these are called the Nagual.  They are a race of shapeshifters.  When individual Nagual learn a new form they can usually slip into a pack or herd for a time in order to learn their ways and language.

Basically, I wanted them to be able to speak to whatever animals they could change into.  So then I had to decide some things.  Do animals all speak the same language, or a different language for each species, or what?  I knew I wanted to give druids and elves the chance to speak to some animals too, but I thought that being able to speak to any animal should cost more than one language slot.

So, this is what I decided.  Each species has a unique dialect based upon one of the root languages below (1-10).  The last two (11 and 12) are amalgamations of many words from many root languages developed over time by the animals forced to live together by their biped captors.  Most animals know their species dialect, plus two of the languages listed below.

Fera Lingua: The Beast Tongues. None of these languages have an alphabet or written words, they are spoken only.

Sylvan (Fey Common, fairy, pixie, brownie, sprite) is understood by many wild creatures of the forest.  Some of these wild animals may have even been taught to read a few words or trail markings such as "danger" or "haven".  Animals usually find it difficult to speak in Sylvan though, as their mouths can't make the proper sounds.  So, an elf or druid who wants to use a single language slot to communicate with a number of wild animals might do well to learn this.

On the other hand, Naganese (the language of the Nagual shapeshifters) is never taught to outsiders and is unknown to both animals and men.  It also has no alphabet, and is only spoken.  The Nagual use this in order to identify each other while hidden among other species.

Animals refer to all other languages as "the babels".  These languages of men and bipeds are too complex for them.  They might be able to learn a few command words at best.  There are always exceptions though, some individuals or species are smarter than others.

So... a chicken would probably know the chicken dialect (based on Avian), Barnyard Slang, and Avian.  However, they probably react better to those who speak Barnyard Slang because they find Avian so highfalutin that they think you sound like a pretentious asshole.

A trained Peregrine Falcon would also likely know their species dialect, Barnyard Slang, and Avian.  Unlike chickens though, Avian is more commonly spoken in the mews where hawks and falcons are kept.  So anyone speaking Barnyard Slang to them would likely be thought of as some lowly yokel.  I imagine that most other domesticated carnivores speak Kennel Cant and rarely speak Barnyard Slang (even if they understand it) because they too feel it is beneath them.

So, what do you all think?  Is there a better way to split these up?

Email ThisBlogThis!Share to TwitterShare to FacebookShare to Pinterest
Labels: Languages

I was thinking the other day about Jeff's games. He likes to put clerics in the role of "undead turner" rather than "party healer".  Being expected to play as a living band-aid isn't much fun.  Saving the entire party from level draining doom by just staring the beasts down until they back away... that's where the fun is.

But the fun is also with Jeff's d30 rule.  Then I thought to myself "d30 Turn Undead!". So, then I made this.  It's the same old turning chart everyone knows and loves, except that it accounts for results of 2-36 in case you decide to roll the 30 rather than one of those 6's.  Here's the chart. 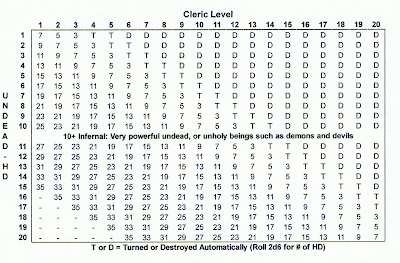 Click the chart to see a bigger version.
The trouble though (I suspect), is that using the d30 to turn undead isn't quite as awesome as the d30 usually is.  Turning undead in OD&D requires 2 rolls of 2d6.  One roll to see if the attempt is successful and the second roll determines how many HD of undead are turned.  As the d30 rule stands, you can only use the d30 once per session.  So, even though it is all one action, you only get the d30 for the success/fail roll, or the HD roll, but not both.

It could be argued that this is fine because to-hit and damage rolls do the same thing, split one action into two rolls of the dice.  That's apples and oranges though, turning does no damage and it acts a lot like a spell.  Personally, I'd rather just roll the 2d6 once.  Use the total as both the success roll and the HD roll and be done with it.  I don't think anything too noticeable would be lost, and single-roll Turn Undead with the d30 would be super awesome.