Lately, I've been trying to fine tune the class tree for my Ezzin setting.  I wanted a bunch of variety, but fast character creation that doesn't overwhelm new players.  I think I'll have class determined by die roll.  I'm missing one class for my list; I still need a race/class that always has Charisma 3.  I know it should be some kind of alien thing, I was thinking a lot about Monopods and Blemmyes but nothing really seemed to fit.

Then today I see that the blog MONSTROUS TELEVISION turned this... 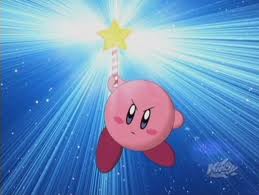 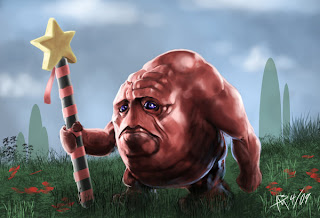 ... and wrote up a Kirby Warpstar Knight race/class for AD&D/OSR games.  It's pretty badass.  Does that dude look like Charisma 3 to you?  That can't be a good first impression, right?  Also, anyone who knows about them will be put off by the possibility of being eaten.  Plus they are always eating, and have you seen them eat?  That's not something you want to watch.  These guys are just what I was looking for.
So yeah, I'm swiping it for my game.  Thanks, yo!  Rather than use the Fighter XP table as suggested, I'll use my class making charts to work up a new xp table for these guys.  Overall there won't be many Kirbies on Ezzin.  Players'll need to roll a Charisma 3 at character creation to have the option of playing as one.  In addition to their freakish appearance and mind warping eating habits, Kirbies are usually either wary or confrontational to others.  Remember, they grew up on a planet where a loved one might suddenly try to eat them just because it was three hours since second breakfast.  Trust no one.
To make the xp table I'm just giving a value to each of their abilities, then I tally those values up to use as a multiplier to the base xp.  Some of the values for the special abilities will get readjusted later, these are more like estimates that I might use for the playtest.
Standard Column (same as Fighter)
+100%  base standard used for every class
+180%  Hit Dice d10
+70%  Fighter Hit Progression
+10%  Level Limit 9
On my charts, classes need to pay for a level limit in order to gain access to beyond human abilities.  Making these guys cap at level 9 puts their max hp (90) just under the max for dwarves (96), which feels right to me.
+25%  Cleric Saves
+25%  Non-Metal Armor + Shield
They don't wear much back home.  When they first arrive on Ezzin, they are usually nude.  It's ok to look, they don't seem to have anything going on "down there".  Kirby reproduction remains a mystery.  Given their light squishy frame, they have dislike wearing most metal armors.  Any armor made of leather or hide must be specially made to fit their spherical shape.  Luckily, Kirbies can make their own armors just like they make weapons, from they're own cleverness and the half digested remains of their enemies.  Most hides will burst apart and be ruined whenever the Knight next puffs up to use it's floating ability.
+90%  Any Weapon
Since they can use two-handed weapons, I'm imagining them as human sized.  Like 5 to 6 feet tall.
+30%  Magic Item Use:  Weapons, Armor, Potions, Rings, and Misc. Magic Items
-----Beyond Human Abilities
+20%  Float (Levitate/Featherfall).  One round to puff up with air.
+80%  Immunity to all naturally occurring poisons and diseases.
-15%  Voracious Eaters.  May be compelled to eat allies or pets.
+20%  Defensive Star Spew.  Air bladders can push the stomach contents under of lot of pressure.  Effects vary depending on how much was recently eaten.  It could be a globby projectile, or a slimy spray.
+65%  Craft Corpse.  Create your own magic items from the bodies of monsters.  Some may run out of ammo or expire.  No other class can learn to use them, except Necromancers.
----------------
+700% Total