The archeological sites in the Middle East that interest me at the moment are mostly in the form of Tells.  Over many centuries new buildings were put on top of the remains of older structures.  These became large hills, mounds of mud-brick and sediment that accumulated as cities built up over time. 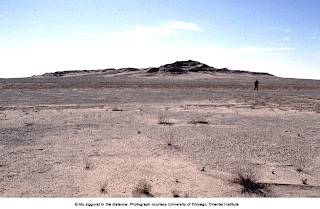 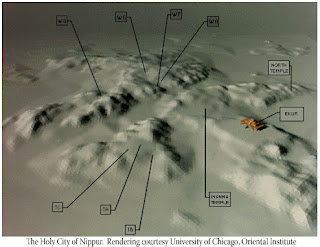 That's not the sad part.


Some of these sites that were dug before the mid 1900s were not done systematically.  Without proper documentation the artifacts can loose context, and valuable information may have been lost forever.

Is this statuette from a temple or a home?  What else was found nearby?  We might never know.

In addition to that, these sites are all in Iraq.  You've probably heard that the political climate over there has been a little tense now and then.  As a result, digs have been started, halted, and started again.  There is a LOT left to uncover, and therefore a LOT more that the human race will eventually be able to learn about Sumerian culture.  I hope that I live long enough to learn about it all.

That's not the sad part either.


Sometimes, the archeologists will start digging but then have to leave because of some turmoil or another.  Then once the site is exposed and abandoned, looters will come and dig for things to sell on the black market.  I don't mean like some punk kid and his buddies.  I'm talking about a large scale pillaging force.


On May 21, 2003, Col. John Kessel and Professor Macguire Gibson of the Oriental Institute at the University of Chicago toured various sites in Southern Iraq by helicopter. After visiting Uruk, Professor Gibson "flew north to Isin, (modern Ishan al-Bahriyat) where I had already heard from a German visitor that it was being badly destroyed. Her report was correct. At least 200 to 300 men were at work on all parts of the site, and the damage was clearly of long duration. We landed and the men came up waving. They were surprised that the US troops would think that it was wrong for them to be doing the looting. They lied by saying that they had been working only a few days, only since the German woman has been there and told them to do so. We told them that it was forbidden, and the army men fired over their heads to speed up their exit. A boy with a tractor and cart, the only vehicle on this site, wanted us to pay him his taxi fee, since we had chased off his fares. The next day, the German woman returned to Isin with a German camera crew, to find hundreds of men at work again. Clearly, an occasional visit by a helicopter is not going to save the sites. Only the imposition of authority in the entire country, as well as the reconstitution of the State Board of Antiquities with its full complement of guards, backed by Coalition power, can preserve what is left of these major Sumerian sites." Scholar Simon Jenkins, in a subsequent report, noted "the remains of the 2,000 BC cities of Isin and Shurnpak appear to have vanished: pictures show them replaced by a desert of badger holes created by an army of some 300 looters."
I get it, you know.  Times were tough and full of craziness.  They're just trying to do what was best for themselves and their families.  I try not to judge, really.  I don't live there, so I don't know what it's like.

but I do know that this is the sad part... 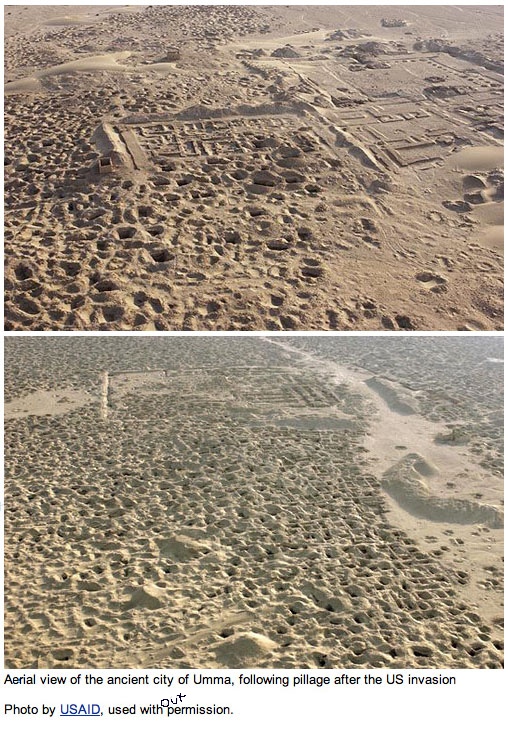 Umma above has been rather thoroughly looted. 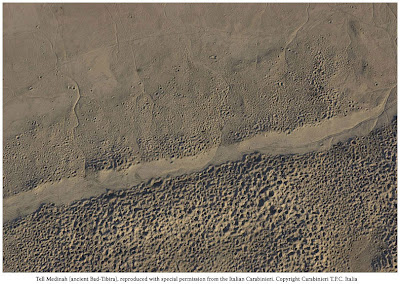 Bad-Tibira isn't a total loss... yet. 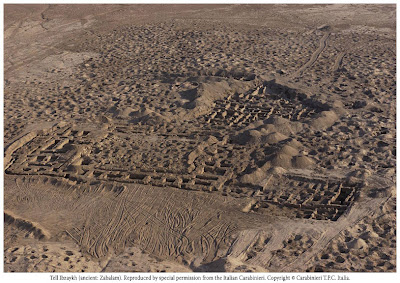 That is Zabalam up above, we know that because of clues found at other sites.  It has never been officially excavated, at all, ever.  What you see there is all the work of looters.  Impressive really, in a soul crushing sort of way.

Hopefully any looted tablets and artifacts will make their way through private collections and eventually end up in museums.  Of course, there often won't be any way to tell which artifacts came from which cities, so good luck with that Sumerianologists.  I wonder how many irreplaceable treasures of history were broken by shovels, dropped, or stepped on.  *sigh* 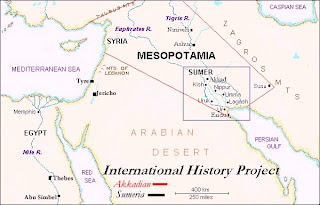 Learning about Sumerian culture and mythology is really a tangled snarl of contradictions and conjectures.  I had no idea what I was getting myself into.  These cities evolved over a huge span of time, their names and gods sometimes changed, old myths were sometimes recast with new characters, and certain beliefs held in one city might be different than the city down the river even though they both existed at the same time.  It's a lot to take in and try to puzzle out.

It's all super confusing, but also super fascinating.  Here are some helpful websites if you are interested in reading about Sumer without any of the ancient alien theories.

The Nippur Expedition, Oriental Institute of the University of Chicago

The Temple of Sumer 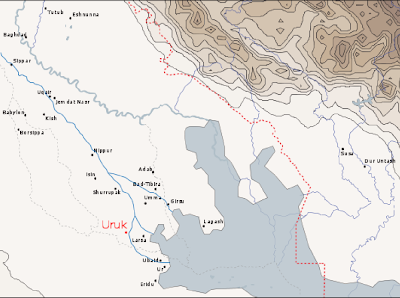 This map is interesting.  The dotted lines show the future paths of rivers.  The Persian Gulf is today receded so far to the south that it would be off the map, but in 3000BC it covered the area roughly as shown above.  The dotted red line is the current Iraq/Iran border.  A few of the cities are out of place, and shouldn't be there.  Babylon and Borsippa haven't been built yet, that probably comes after the Euphrates changes course 500 or so years later.  Also, Baghdad has apparently traveled back in time a few millennium just to appear on the map here.  Maybe those are just on there for reference?  Regardless, it really is one of the best maps I've found of Sumer circa 3000BC.

Email ThisBlogThis!Share to TwitterShare to FacebookShare to Pinterest
Labels: Maps