It can generate valuable plants for any type of setting.  It was originally intended to be used as a treasure table, but it seems far too unwieldy to use during play.  I feel like this table is a rough draft, but I'm setting it aside for now.  I'm posting it here until I decide exactly what I want to do with it.

To use the table in it's current form, just roll a d20 for each column (except "Special"). 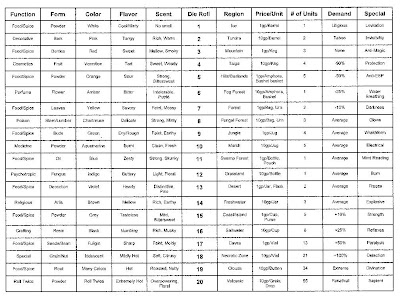 "Function" shows the basic reason why people are willing to buy the plant. It's up to the GM to come up with specifics.  Crafting might mean that it is a component for alchemy, or something more mundane.  It could be that the wood is prized for making musical instruments, or the resin might be used for making a strong glue, or the powder might be useful to blacksmiths for strengthening steel, or whatever.  A result of Special means that the plant has some quality that appears magical and might be useful to anyone, roll on the "Special" column to see the type of effect.  Special plants are highly prized, especially by alchemists, so any gp amount from the "Price/Unit" column can be multiplied by 100.

"Form" shows the part of the plant that is valued. It might also have been processed into a powder, oil, or whatever.  This combined with the results from "Color", "Taste", and "Scent" help in describing to the PCs what exactly they have found.

"Region" shows where someone is likely to find these plants growing wild.  It's up to the GM to determine if the plant is common or rare; found in many regions or only this one type.  This column only shows the terrain type where the plants are most likely to thrive.

"Price/Unit" and "# of Units" are the treasure table columns.  These determine the size and number of containers that the PCs have found, as well as the standard price for a full container.  Notes about container sizes and equivalencies can be found back here.

The "Demand" column is used when the PCs try to buy or sell the plant.  It shows whether the locals feel strongly enough about the plant to have a special reaction, or if the standard sale price should be adjusted. Litigious means that the plant is illegal for some reason.  Taboo means that anyone carrying the plant is frowned upon, and may be asked to leave.  Usually this is because of some crazy custom or superstition, but maybe some local monster really is drawn to the smell.  Extreme demand means that the PCs could sell the plant for up to 3X its normal value, garner favors, and become very popular with the locals.  Fanatical demand means that the locals are zealous about getting the plant, they may even be highly addicted to it.  The locals will refuse to take no for an answer, and might even try to kill the PCs just to get as much of the plant as possible.